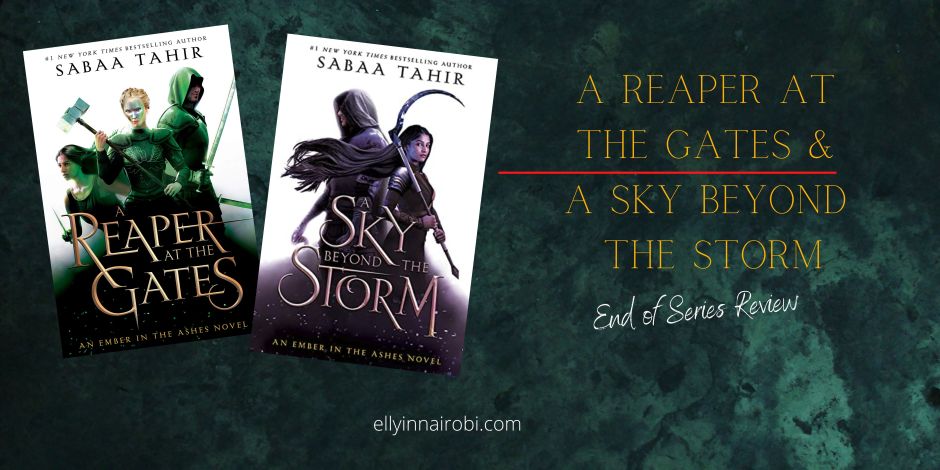 A Sky Beyond the Storm

The long-imprisoned jinn are on the attack, wreaking bloody havoc in villages and cities alike. But for the Nightbringer, vengeance on his human foes is just the beginning.

At his side, Commandant Keris Veturia declares herself Empress, and calls for the heads of any and all who defy her rule. At the top of the list? The Blood Shrike and her remaining family.

Laia of Serra, now allied with the Blood Shrike, struggles to recover from the loss of the two people most important to her. Determined to stop the approaching apocalypse, she throws herself into the destruction of the Nightbringer. In the process, she awakens an ancient power that could lead her to victory–or to an unimaginable doom.

And deep in the Waiting Place, the Soul Catcher seeks only to forget the life–and love–he left behind. Yet doing so means ignoring the trail of murder left by the Nightbringer and his jinn. To uphold his oath and protect the human world from the supernatural, the Soul Catcher must look beyond the borders of his own land. He must take on a mission that could save–or destroy–all that he knows.

A Sky Beyond the Storm marks the end of the Ember in the Ashes. Laia has changed.  She is no longer the frightened girl at the start of the series.  Since then, she has endured torturous hours, under the commandant.  She stood up to bullies in the resistance. Endured heartbreak thanks to the Nightbringer.  She found the strength to save Elias and her brother.  Most important she found purpose and the determination to follow through. I admire her tenacity and her ability to keep going no matter what.  This determination to find another way, not to give up.

Elias’s character when we first meet him is on a quest to escape his harsh unforgiving life at Blackburn.  He doesn’t succeed and gets pulled back each time, by Helene, by the Commandant, by the masks under his command.  The consequences he faces should he be caught running were demonstrated on fellow masks who ran away. The punishment was brutal.  After a series of unfortunate events, in which Elias goes through a trial to become the emperor, he makes a choice not to be a mask anymore.  This decision means he forfeits his life and Marcus chooses to end him. At this point, Elias is saved by Laia. To repay her, Elias chooses to save Darrin, Laia’s brother, and this decision, this giving of himself, leads him to the role of the Soul Catcher. Elias is a struggling soul catcher.  He doesn’t excel in this role, and even though in this last book he comes back to help fight the Nightbringer, I wished there was a way out for him.

The only disappointments in this book are the lack of the Commandant’s story. I wish there was more about her, about why she chose to be so cruel even to her own son.  Her motivations are really not defined, and even though she makes the perfect villain, her story deserves more. The other unfortunate character is Harper. There’s a saying I heard a lot at my old job. ‘Bad things happen to good people.’ I really don’t like this saying, because why? Why do bad things happen to good people? Harper is a perfect representation of this saying. And while I don’t question why Sabaa Tahir goes this route, it adds to Helene Aquilla’s growth, but it sure sucks for Harper. I think he deserved to live and enjoy the world he had fought so hard to create.

The series came to an end with an epic fight and a lot of losses. A host of characters leave in the tragedy that is war. But happiness does come for all the remaining characters. It was a good ending for Laia and Elias to find their place.  In a way, so does Helene, despite her many losses. These four books were worth it.