Sunrays danced into the quiet bedroom through a crack in the heavy curtains.  They made glittering shapes on the queen-size bed where rumpled covers fell 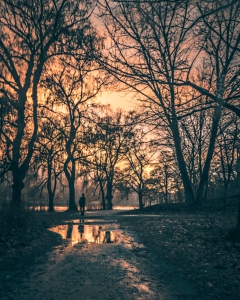 to the floor.  The white floral sheet half covered the two figures deep asleep on the bed.  A car passed on the street and Danny opened his eyes, his sight blurred at first before it cleared and fell on the woman lying beside him.

Jasmine.  She slept with a hand tucked under her cheek.  Her lashes long, her lips slightly parted, she breathed in and out in gentle motions, her slender body curled toward him.

He had known it would be good between them.  Really good.  Now all he needed to do was convince her they were right for each other.  A much tougher task, he thought with a sigh.  When she wrinkled her nose and curled into the pillow, he grinned.  Watching her now, she reminded him of a kitten, so cute and vulnerable.

He couldn’t explain it.  The woman had crawled into his bones and taken over, it seemed his heart had always been hers.

Her phone buzzed and he frowned when she turned sleepily, reaching a hand out to the grab the cell phone on the bedside table.  The motion was so natural he wondered who dared call her so early.

“Hello,” Jasmine said, her voice heavy with sleep.  Her hair was mussed, the curve of her neck enticing, Danny felt compelled to drop kisses on the soft skin.

He moved to do exactly that, but then she sat up in a panic.

“What?  Now?  Why?” The answers had her kicking away the sheet and she ended the call with a gasp.  “Oh God.  Get up, Danny.  Please get dressed.  We have to get you out here.”

“Why?” Danny frowned, watching her grab a robe from a couch in the corner and slip it on, hiding her beautiful body from him.

“Stop lazing around,” Jasmine said, moving to pick up his trousers and throwing them at him.  “My mother is on her way.”

“Is this normal for you?  Coz it’s not for me,” Danny said, sliding out of bed.  He ignored the trousers and reached for her instead.  Pulling her into his arms, he kissed her.

“Good morning,” he said, when he was done kissing her.

Shaking her head, as though to clear a daze, Jasmine pushed her hair back.

“Don’t distract me.  Will you dress?”

Jasmine pulled away from him and rushed to her closet.  Feeling put upon, Danny picked up his trousers, wearing them with a sigh.

“You’re hard on a guy, Jazz.  At least be apologetic about this.”

“I am,” Jasmine said, her voice muffled in the closet.  “We can talk about it later too.  Right now,” she appeared at the closet doors in a pair of jeans and a white dress top.  She was running fingers through her hair when he pulled her into his arms again.

“Danny,” she moaned, melting into him.

“You can’t blame me,” Danny said, nibbling at the sensitive spot on her neck.  “You’re delicious.”

“I haven’t showered,” Jasmine said, laughing.  “You’re going to get more than you bargained for if you keep this up.”

“I wish you could calm down and stop being so frantic.  It’s just your mom.  I want to meet her.”

“Oh no,” Jasmine said, pulling away.  “Danny, you don’t know my mother.  Right now, she’s coming because I didn’t show up for dinner Friday night.”

Bending down, she picked up his shirt from the floor and pressed it to his chest.

“Kiss me,” Danny bargained, liking how hard she was imploring him.

Jasmine leaned up on her toes and kissed him sweetly.

“Now dress, I gotta get the house ready for her.”

Danny watched as she rushed out of her bedroom.  Shaking his head, he wore his shirt and went on a search for his socks.  He found both in the living room where Jasmine was picking up her clothes from the night before.  Danny sat on the couch they’d spent half the night on.

“I’ll never forget this couch,” Danny said, sneaking a glance at her.

Jasmine’s answer was to rush back to her bedroom.  It was obvious, they still had a lot unsaid between them.

She came back wearing a sweater and leaned on the wall closest to the front door.

“Can we talk later?” she asked.

Danny finished wearing his socks and stood, looking at her, noting her guarded gaze.

“Over dinner tonight?” he asked.

She opened her mouth to protest, but he stopped her, placing a finger over her lips.

Jasmine stared at him, as he picked up his car keys from a small table next to her and smiled.

With that, Danny was out the door and she was left staring at the closed door.

Minutes later, her mother pulled into the small driveway and Jasmine sighed.

“So close,” she murmured, opening the door, nerves racing through her.

To be continued….Thank you for reading!