Longing to Heal the Earth

People don’t realize the earth is…alive, her grandmother would say. 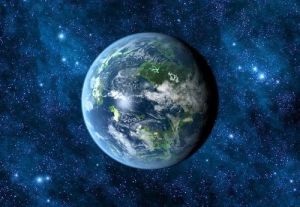 Before…when her grandmother was young, the world was lush green.  Thick trees grew tall, so tall, one couldn’t see the highest branch.  Green grass in fields, vast and wide, as far as the eye could see.  Her grandmother would run down the hill, to the valley where the fresh spring flowed.  The water sweet, cool and clear.  So clear, the rocks in the riverbed were visible.

Those days, her grandmother would say that all she needed to do was scoop water in her hand and take a sip, drink a gulp, dunk her face in the fresh spring water and drink her fill.

There was no need for machines to clean water.

Not like now, Mira thought, her gaze on the clear glass of water on the table.

All her water came in bottles sold at the supermarket.  She was thirty and had yet to see a clear spring or river, one safe for her to dunk her head into the precious water and drink her fill.  Mira gagged at the thought of dunking her head into the Nairobi River for a drink.  The river was sick with muck, garbage, waste….God knew what else…one sip and she’d end up in the hospital with poisoning.

Her grandmother’s stories sometimes sounded like lies.  Yet she knew, her grandmother would never lie to her.  Mira believed her when she spoke of lush green fields and tall trees.

On days like this, she wanted a taste of the water in a clear fresh spring.  Mira took the glass and drank deep.  It was hot outside, and she still needed to go to the market.

Letting a sigh escape, she got up, wore her hat and took her purse and a light bag she used for shopping.  She stopped at her door to wear the nose mask that had turned essential in the past year, then left her apartment.

The masks were for the dust.  In a frenzy of progress, the country had lost eighty percent of its tree cover.  Forests, fields of green and lush valleys replaced with forests of sky scrapers, apartment buildings and factory buildings.  The rivers had turned to muck-filled waters thanks to the factories dumping at will without regulation.  The streets became filled with trash, as the population increased and no garbage regulations were imposed.  Garbage, muck, chemicals in the air…no trees, the air changed, the soil changed…the earth started dying and so did the people.

Mira worked in one of the factories that manufactured portable home-water cleansers for those who could afford them.  Water was an essential commodity.  One that the entire nation needed to live.  The water cleansers brought in enough revenue to keep the factory going.  It was a good job, a secure one.

Her job allowed her to afford an apartment that provided clean water, air conditioning to escape the relentless heat and sealed doors to keep out those who couldn’t afford it.

Her people were killing the planet with progress.  The reduction of trees had led to a drastic rise in temperatures.  Summer weather turned deadly, those living in the semi-arid areas suffered first.  The heat spread through the nation like wildfire, it dried the rivers and lakes.  By the time the government started responding to the crisis, essentials like water had turned into a precious commodity peddled by opportunists.  Water was the new Oil.  Oxygen, the second highest money-making commodity.

Air conditioned houses were an essential now.  No living soul could withstand the heat at midday.  Unfortunate souls caught in the daily heat wave met their deaths within the hour if they couldn’t find air conditioned shelters.  It wasn’t easy as the government commissioned shelters got overcrowded.  This daily scramble to get into these shelters was even more deadly.

Mira shivered.  She made a conscious effort never to be outside at midday.  Once, the newspapers were filled with stories on politics, now they were filled with the death toll numbers from the daily heat wave, the severity of water shortages, and what to do to escape the heat.

Mira reached the supermarket.  She stowed away her nose mask, just as she saw customers running to the vegetable stands.  Vegetables were a rare commodity.  She caught a glimpse of leafy greens and found her self running too.  Slipping in to the throng of struggling bodies, she slipped under a thin man’s arm and reached out her hand to the shelf.  Her fingers searching, searching, then they closed over a bunch.  She gripped it tight and fought hard to pull out of the human scramble.

When her hand was free, she hugged her bundle tight against her chest in case an opportunist tried to take it away from her.  She kept walking and didn’t stop until she was in the canned food section.

A smile escaped when she saw the bunch of fresh green spinach in her hand.  She hadn’t seen one of this in three months.  The price on it was high.  One thousand shillings.  More expensive than chocolate.  Lord knew how long it would take until she could get her hands on another one like this.

Fresh fruits and vegetables were hard to come by.  Mira headed to the water aisle and got a ten bottles which she put in her cart for the week.  She took one bottle and stared at the label.  The ice-caped mountain, with flowing streams and green trees on it’s hills seemed surreal.  She doubted anyone in her generation had ever seen anything so beautiful.

No wonder her grandmother insisted that the earth was alive.

‘If we had only stopped killing the trees, stopped abusing the earth by dumping garbage, pumping gases into the sky at will…my dear Mira, you might have seen how clear a spring can be,’ her grandmother would say.  ‘I miss that sweet water I tasted, my girl.  Nothing like this garbage you drink.’

Mira sighed and placed the bottle into her cart.

She too wished for that sweet spring in her grandmother’s past.  If only she could heal the earth…

Days go on, this week a prompt on writing for the earth.  Collect the garbage, don’t cut your trees, and ride a bicycle or walk to the bus stop.  Love the Earth as she’s alive.