“Lift your arms,” Kim said, and Koya stepped back from the wooden table.

She smiled when Kim expertly wrapped an apron around her waist.  He tied it at the back and kissed her cheek.

“Okay,” he said and she stepped back to the table.  She smiled when Kim skip danced to the 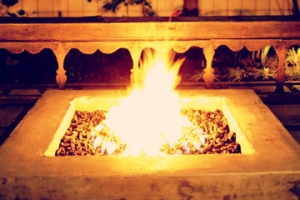 meat cooking on the grill.  “Bet you didn’t expect to cook your own dinner.”

She popped a slice of salty tomato into her mouth and pointed her knife at him.

“You fooled me with the epic suit and red rose.”

“It’s not that bad,” Kim said, grinning at her.  “Look, open skies, beautiful scenery, nothing but stars.”

Koya winked and finished slicing the tomatoes.  She couldn’t deny it, Kim’s preferred venue was gorgeous.  Kim had borrowed the place from a friend.  A private property in Ngong undergoing the last stages of construction.  The backyard was artfully landscaped: wooden benches and chairs on soft green grass.  Her toes begged to sink into the green.  The barbecuing pit was in the middle of the yard and came complete with a charcoal grill and work tables.  Koya loved the setting.  She envied the eventual owners.

The self-service dinner was very Kim.  He loved barbeques.  She watched him slice meat on a board, cutting it into pieces, then serving on two plates.  She finished with the tomatoes, cilantro and cucumbers.  Placing them on an oval plate, she took them to a table on the grassy patch.  In minutes, dinner was ready, and Kim helped her remove the apron.  He disappeared in the house, and she sat on one of the benches, staring at the starry sky.

Dinner was enjoyable.  Kim was comfortable.  She laughed and ate…way too much.  She teased him as much as he teased her.  When she removed her shoes to walk on the grass, he didn’t bat an eyelash and joined her.  After a while, they sat on the grass staring at the stars. Her head on Kim’s lap, his hands braced back.

She studied him as he stared at the stars.  A lifetime worth of memories filled her thoughts.  Kim had seen her cry over spilt milk on the way from the shop when she’d been sixteen.  He laughed at her then.  Then the time Charlie left her…Kim had scolded her for crying too hard.  Telling her it wasn’t the end of the world.  Of course, there was two years ago, when she lost her father.  That time, Kim held her tight and murmured soothing words, allowing her to cry as much as she wanted.

She saw it now.  How deep his support had been, how faithful, how hard he stood by her.  He was woven into her life.

“What are you thinking about?” Kim asked, and she blinked realizing he was watching her.

“Nothing,” she said, giving him a small smile.  “Dinner was delicious.  Thanks.”

“Now that you got your meat,” Kim said, touching her braids.  “Are you ready to talk about us?”

Us, now there was a word.

Koya shifted so that she was on her left side, staring at the barbeque pit and the fire still burning there.  Kim stroked his fingers through her braids.  The touch was comforting.

“Don’t say no,” Kim said.  “You have a bad habit of making abrupt decisions on personal issues.”

“I consider that a plus,” Kim replied, his tone heavy with promise.

Thinking back, Koya could suddenly see Kim’s heart in all he had done for her…with her…She was terrified Kim cared a lot more than she did for him.  She had power over him.

“Do you need time?” Kim asked.

“So you know,” Kim said, touching her chin with gentle fingers.  He turned her head so that she was looking at him.  “Don’t feel pressured.  I can wait.”

That was it though, seeing him waiting for her…how long he had been waiting, she thought.  She couldn’t help feeling a tad guilty.

She held his gaze.

“We’ll always be friends first,” Kim said, rubbing her lower lip, his thumb rough against her skin.  “I know it won’t happen overnight.  I just need you to promise to give us a chance.  Will you?”

The deep hope in his gaze had her nodding.  His delighted smile made her happy, and when he leaned down and kissed her, she closed her eyes, her heart beating hard.

Thank you for reading….to be continued –>

Day 7 – Finally getting into the nitty gritty of it…challenge today was clock 600 words of a story you are working on. Cheers, Koya’s Choice – 15 is up!