“I heard about the kiss,” Grace said later that evening. 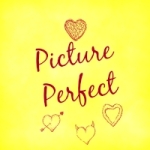 They were at Victoria’s apartment and Grace was helping her make dinner. Victoria watched Grace stir-fry a mix of vegetables with olive oil and black pepper.

“He kisses and runs off,” Victoria said, checking the time on her microwave, it was almost eight o’clock. “He said he’d call but, it’s been hours.”

“Things must be going well if you’re waiting for his calls.” Grace winked at her. “You know those first days of a relationship. Will he call, no he won’t, why isn’t he calling?”

Victoria laughed. “And the, ‘damn it he didn’t call, I won’t talk to him.”

“Then he calls,” Grace picked up the pan from the cooking range and with dramatic flair, she served the vegetables on two plates. “The heart flutters, nervous energy, walking around the house while you talk, finger twirling in your hair or weave.”“Gosh, we’re not in university, Grace.”

“But you know it’s going to happen anyway,” Grace said with a smile, placing the pan in the sink. “I cook, you clean.”

“As always,” Victoria shook her head. “What do you do at home with your husband?”

“I got a housekeeper, she cleans,” Grace said, taking their plates to a table by the window.

Victoria had already set a bowl of rice in the middle and a fruit salad. She took a jug of fresh orange juice and took it to the table.

“A housekeeper,” Victoria said with a lifted eyebrow.

The last housekeeper in Grace’s house had left amid suspicion of an affair with Grace’s husband.

“Don’t worry, I have this handled. She comes in at nine o’clock. My husband is long gone to work then, and she’s supposed to leave by three in the afternoon. Hubby comes in late in the evening.” Grace sat down and poured juice into their glasses.

Victoria sat down too and served the rice. “What if he comes during the day?”

“I have people who tell me what’s going on.” Grace sighed. “I trust him though. I have to, Vicky. If I didn’t, I’d end up stalking him in his office, and you know how that would look.”

“He’s a good man,” Victoria said then, needing to assure Grace, “better than most, Grace.”

“Boy don’t I know it,” Grace took a bite of the food, and paused to savor the taste. “Good, I’ll make this for him on Sunday night.”

“I’m always your guinea pig,” Victoria said taking a bite too. The stir-fry was good, the taste of pepper bursting in her mouth, it was delicious. “Does he know I taste the food before it gets cooked for him?”

Grace grinned. “Nope, he thinks I’m the best darned cook in the world.”

“He should know,” Victoria shook her head, “Why the precious dinner on Sunday?”

“His mother is coming into town tomorrow.” Grace shuddered and reached for her orange juice, taking a healthy gulp. “This is my last day of freedom until Sunday. I turn into a grumpy dragon until then. I’m the one who’ll call you with emergencies.”

Victoria sat back in her seat and studied Grace. “I don’t know how you do it.”

“I wish I could infuse my veins with alcohol until she goes, but she’ll smell it and call me a drunk. I can’t do anything right with that woman,” Grace said. “Do you know she’s coming to get money to send her last daughter to college? I’m paying half of that money, and she’s still going to be critical and mean with me.”

“What will you do when you get kids of your own?”

“Hang her,” Grace said. “I love my husband, but his mother drives me crazy. I think she feels I stole him from her.”

Victoria chuckled. “Well, you sorta did, Grace. He’s her oldest son. He prefers to live in Nairobi instead of upcountry.”

“I’d possibly divorce him if he took me to stay upcountry,” Grace shuddered. “She’d be a door away. Can you just imagine the drama that would ensue everyday? I’ll keep us in Nairobi until I die, or she dies.”

Victoria reached over and squeezed Grace’s right hand. “Stop worrying Grace. You make me glad I don’t have a mother in-law just yet.”

“You will soon,” Grace said with a wicked smile. “Then you’ll come crying to me, I can’t wait.”

“Are you my friend?” Victoria asked with a teasing smile.

“Your very best one,” Grace said just as Victoria’s phone buzzed on the coffee table. “And the owner of that mother in-law is calling right now.”

“Stop it,” Victoria shushed her and got up to answer her phone. “Hello?”

Victoria swallowed the rice in her mouth in a hasty gulp.

“Yes Mum,” she said, trying to infuse the right amount of enthusiasm in her voice.

Grace’s eyes went wide and she stuck her tongue out at her.

“Are you coming home this weekend?”

“Yes, with Cliff,” Victoria said. “Is everything alright?”

“I was hoping you’d go shopping for a dress with me.”

“A dress?” Victoria asked warning bells ringing in her head.

“Remember Wanja from the farm next to ours? She’s getting married and her mother asked me to cut the cake for the couple.”

“Yes, I promised Wanja’s mum I’d ask her the same for your wedding.”

And there it was…Victoria dropped on to the couch.

“Anyone special we should meet?” her mother asked. “Clifford has Olive, but those two are always in the hospital. Vicky?  Are you there?”

“Mum,” Victoria said. “How about I take you for lunch tomorrow? We’ll go get that dress and maybe a suit for Daddy. You two will look fabulous for Wanja’s wedding.”

“I know you’re changing the subject. I worry about you, Victoria. Living alone with no one to look after you,” her mother went on. “It’s not good.”

“Yes, yes, you’ve said that before,” Teresa Waina said. “Alright, what time will you pick me up? Is your car working?”

“Cliff got it fixed for me,” Victoria said. “How about noon? Don’t be late, Mum.”

Her mother ended the call and left her staring at her phone. She always felt so guilty after a call from her mother. She had a good job, a nice apartment; still her mother felt that she hadn’t fulfilled her goals. At twenty-nine, she was meant to have had five children and a husband.

A glass of juice appeared before her, and she glanced up to find Grace smiling at her. Taking the glass, she sipped it and the taste of vodka burned down her throat.

“I figured it was time to break out the big girls’ drinks,” Grace said sitting next to her. “I know that look. Don’t worry, she’s just concerned.”

Victoria let out a sigh and sat back on the couch.

“Well, I wish the concern came with a manual to navigate the insane dating scene we face now. In her days, it was so easy. Does she know men aren’t what they seem to be now? I mean, good men are really hard to find. They’re all either married, confirmed bachelors, or bonafide players. What is a girl supposed to do?”

“Drink?” Grace asked holding up her glass for a toast.

Victoria stared at her.

Grace winked at her and she chuckled. She clinked her glass to Grace’s and took a healthy sip of her juice, appreciating the burn of vodka going down her stomach. It warmed her up.

“Yeah,” Victoria said. “I guess we’ll be the same when it’s our turn.”

“Probably worse,” Grace said shaking her head. “If I get a daughter, she is so not suffering under some mother in-law. If I get a son, the woman he marries will probably have to contend with me for life.”

Victoria laughed and shook her head. “And the cycle continues.”

Grace’s stomach growled and they both laughed. “I guess we should eat.”

Victoria got up and headed back to their table. “You need energy for your crazy mother in-law, and I need it to face my mother tomorrow. Argh…shopping is going to be insane.”

They ate, drunk too much, and were dancing and singing to Sura Yako when Victoria’s phone buzzed.

“Hello?” she answered watching Grace shaking her booty. She bit back a laugh.

“I wouldn’t call it drunk. Tipsy?” Victoria said dropping on to the couch. “Grace and I are having a de-stress session.

“Oh, you know, act silly, get drunk, dance and sing badly to all kinds of songs.”

“Why are you stressed?”

“I’m a woman, Eric.” Victoria stated. “What other reason do you need?”

He laughed and she rolled her eyes at Grace who was miming lovey-dovey hugs.

“I’m heading to bed. I have an early start in the morning. Are you going to sleep soon?”

“Not really, Grace is here.”

“When I get back, we can talk more about these de-stress sessions. They sound interesting.”

“Which category do you fall into?”

“Married, confirmed bachelor or a bonafide player? What category?”

“This is a trick question, isn’t it?”

“Fine, since you’re tipsy, I guess you won’t remember my answer.”

Victoria stared at Grace who’d stopped dancing to watch her.

“That’s what I thought,” she said after a moment. “Goodnight, Eric.”

She dumped the phone on the couch.

“What did he say?” Grace asked.

“It’s not so bad. You can crush on Bien Aime with no guilt whatsoever.”

“Yeah,” Victoria lifted her glass, “to me and the legions of women who want him too.”

Grace lifted her glass and they laughed as the song restarted.

Victoria crawled into bed at around one in the morning. She’d called a designated driver to drive Grace and her car home. As she settled in to sleep, Victoria wondered if the problem wasn’t her. She spent so much time worrying about work, what her bosses wanted, what her mother wanted,…never what she wanted.

What did she want?

If she could define that, perhaps everything would get easier, she thought as she drifted to sleep.

To be continued…..Thank You for Reading. ^_^