“What’s wrong with your car?” Eric asked when he settled in his seat.

“I don’t know,” Victoria said with a shrug. “My brother towed it to a garage a few days ago. I’m hoping he

gets it back to me soon. I miss the freedom of my car.”

She sipped her drink and stared into the glass in silence.

He cleared his throat and asked, “What did I do earlier?”

She lifted her head to look at him.

“When we were in Upper hill this afternoon,” he said quietly. “We were talking nicely; you were having a good time. When I finished taking Beth’s photos and came to find you at the gazebo, you changed. What did I say?”

“Nothing,” she said her gaze sliding away from him. “It was foolish.”

“Your feelings aren’t foolish, Victoria.” He touched her shoulder, marveling at how soft her skin was.  “Please just tell me.”

She closed her eyes. “Why?”

“Because, I want to know,” Eric said.

She met his gaze again. “I saw you with her. How she made you smile, you light up when you’re around her.”

“Victoria,” he started shocked by how deeply she saw inside him.

“You must love her very much,” she said quietly. “How can you stand it?”

He dropped his hand away from her shoulder and reached for his beer. Taking a healthy sip, he shrugged.

“I stayed away. It was easier.”

“Hence the dangerous excursions to all kinds of places,” Victoria said studying him. “Did it help?”

“Yes,” he said with a small smile, “until I came back for the wedding. I’m glad you went to the church, you distracted me and the day has ended without me noticing.”

“What about the rest of your life?” Victoria asked. “Are you going to avoid them?”

He glanced at Victoria…maybe she could be the distraction he needed.

“Nothing,” He smiled and leaned on the counter to study her. “You’re very beautiful. I don’t know if I’ve told you that.”

Victoria laughed and pushed her drink away.

“No, you’re not going to use me as a distraction.”

“I’m just giving you a compliment,” Eric said, noting the small laugh lines that appeared at the corner of her lips. “I’m stating a fact here.”

“You’re not flirting?” she asked giving him a skeptical look.

“No,” he shook his head even though he didn’t quite manage to hide his grin.

She punched his left arm lightly.

“You can’t even lie with a straight face.”

“You’re the one who wants me to lie. I’m happy telling you the truth.”

“Let’s discuss something else,” she said shifting in her seat to look at him.

Dark hair fell over her right eye and he reached out to push it back. She sat still as he stroked a finger over

her soft brown cheek. When he dropped his hand away, she met his gaze. He read fear, and uncertainty. She looked like she wanted to bolt for the doors, but wouldn’t.

“Vicky,” a gruff voice interrupted the moment and he turned to find a tall man standing a few feet away in an impeccable suit. He was looking at Victoria expectantly and giving Eric an irritated glance. “Can I talk to you for a moment?”

Eric turned to find Victoria staring at the man with a mutinous gaze. He started to send the unwelcome man away, but she stopped him with a hand on his arm.

“Give me a second, Ronald,” she said with a cold tone. She slipped off her chair and turned to him. “Eric, I can get myself home.”

“No way,” he protested taking her hand. “I promised Olive.”

“There is no need to drag you away from the party going on downstairs. Beth and Taylor’s families need you there. Please, don’t worry about me. I’ll take a taxi home. I had a very good time today. Thank you,” she said leaning to press a chaste kiss on his jaw. “Let’s meet again.”

She let go of his hand and turned to the man standing a few feet away. Roland or Donald, whatever his name was, slipped an arm around her shoulders and he felt an ugly surge of jealousy sweep through him.
Who was this guy holding on to her like he owned her? It didn’t help when the bastard turned and gave him a smirk. Reaching for his beer, Eric took a healthy sip and wondered if he could get away with punching the smug bastard. He sighed and turned away to keep from running after Victoria.

“Who is that guy?” Ronald Mutoko asked Victoria when they were in a private alcove around the corner from the Tropical Isle bar. “Why was he touching you?”

Victoria folded her arms against her chest and studied him. She’d found his impeccable taste in suits attractive once. Now, the tailored garb seemed too much like a costume Ronald was using to hide his rotten nature.

“What does it matter?” she asked meeting his dark gaze. “Why should it matter to you who touches me?”

“Vicky, why are you acting like this? If it’s about that new concierge, you don’t have to worry about her. I’ll fire her and you’ll never have to see her again.”

“She’s not my worry, Ronald.” How had she never seen this horrible side of Ronald? “And leave that poor girl’s job alone. You’re the one in the wrong here. I trusted you and instead you,” she broke off and looked away from him. “You turned me into an idiot. That’s never going to happen again.”

“What if I apologize?” he asked touching her arm.

She shrugged his hand away. “You can apologize. It won’t mend us.”

He took a step back and shook his head. “You can’t ask me a question like that.”

“Why not?” Victoria asked her voice rising unintentionally.  Jeez, he was such a bastard.  “You felt you have the right to ask about the guy I was just having a drink with. Why shouldn’t I ask you about the women you’ve slept with behind my back?”

“Don’t talk so loudly.” Ronald looked around the hallway, making sure no one was around.

She was disappointed there wasn’t anyone in sight.  Not because she liked drama, but she wished others would see this Ronald.  This sleazy, unscrupulous side of him.  God, she was getting bitter.

“I already apologized,” he said returning his gaze to her. “Let it go, and let’s start over. I promise I will never do it again, Vicky.” 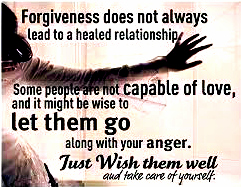 Goodness did she have stupid stamped on her forehead? She scoffed and stepped away from him.

“I hope your next girlfriend believes you. We’re over, Ronald. We’re going to keep up a professional relationship, that’s it. If you have any questions about the hotel sales, I’ll be happy to answer them. On a personal note, you’re nothing to me.”

“You can’t do this,” Ronald said glaring at her.

“Yes I can,” she said narrowing her gaze. “I should have done it a long time ago, but I’ve been too scared of the future to face the truth. Thank you for opening my eyes.”

“Vicky,” he grabbed her upper arm tightly when she turned to leave. “You have no right to do this.”

“Let go of my arm, Ronald.” His fingers were digging into her skin and it hurt.

“Who do you think you are to judge me?”  His fingers tightened around her arm. “Aren’t you also just as vulgar? Look at you, slathering on red lipstick, dressing in a provocative dress, and having drinks with strangers. Weren’t you asking for attention from that guy I just dragged you away from?”

She winced when he tightened his hold and tugged her closer to him. His cologne made her want to gag. It was unbelievable as she’d once found it enticing.

“You still want me.” His leering tone made her skin crawl. “You want it, you’re just angry with me for choosing another woman. So you’re trying to make me jealous by going after strangers.”

“I’m not even going to address that comment. Let me go before I start screaming.”

“I’m the manager in this hotel.” He sneered at her, his face turned into a hateful mass of lines that froze her in place. “You can scream, but there’s nothing they’re going to do for you, Vicky…”

To be continued… Thank you for reading >_<

One thought on “Picture Perfect 7”